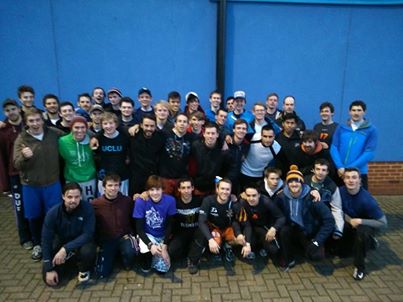 The 2014 captain Richard ‘Pringle’ Taylor addressed all the trialists, gave a basic rundown of what the weekend would look like and then we took to the artificial turf.

The trialists were immediately treated to the patented Ka-Pow! Ultimate Animal style warmup, before starting the day’s drills. Saturday’s focus would be offense and the scouts would be looking at break mark, cutting pattern and hucking/deep receiving drills and then the implementation of those skills in the games at the end of the day.

The Sunday was D-Day and after a second go at warming up Ka-Pow! style, the trialists were split into three groups who would participate in drilling stations which would teach and then allow them to practice the fundamentals of our under cutter defense, marking and skying. After lunch on the Sunday, the trialists re-warmed themselves up with a little bit of hellbox, before moving onto the Sunday games and the last chance to impress the scouts at this first trial.

Pringle had this to say about the trials: “Thank you to everyone who attended the first trial weekend. I’m really glad so many of you have said you enjoyed it and learned a lot. You made it a really enjoyable and valuable couple of days that were surprisingly easy to run, due to you putting in the effort, listening and taking in what we were saying.

We were really impressed by the overall standard of everyone’s game and the visible improvement over the weekend, especially from the guys who have only been playing for a year or two.”
Unfortunately, with this Sunday’s Winter League being canceled, trialists will have to wait until the second winter league of 2014 comes around on February 9th. Keep up the hard work until then!