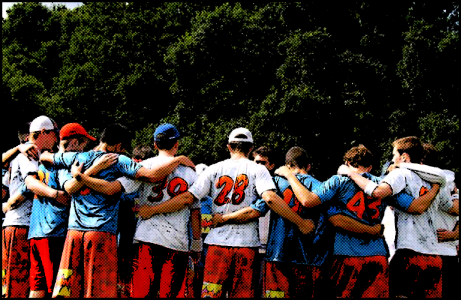 With the Tour season ending on a high, Ka-pow! were looking to maintain their momentum at London Regionals. Featuring a squad almost at full strength and in high spirits, the team looked to finish the day filling one of the top-five berths that would guarantee a place at Nationals.

The team congregated in Roehampton early, looking forward to an intense day of Ultimate. The first hurdle came in the form of a team with little tournament experience but a lot of enthusiasm. Jekyll and Hyde 2, who suffered an earlier defeat to Tooting Tigers, strung together some decent offence, but errors soon crept in and Ka-pow! capitalised on every mistake. Cycling through the two defensive and one offensive lines point by point, the game was seen out for a first victory of the weekend.
Ka-pow! 13 – 0 Jekyll and Hyde 2

Game 2: Tooting Tigers
After a disappointing season so far, Tooting came to Regionals to try and take a scalp against teams they had not yet had the chance to face. The game started brightly, with feisty play from both teams and a number of optimistic, but often fruitless, long shots. As both teams found their rhythms the play improved, and Ka-pow! stole a few breaks to take the half. The second half started with the Tooting D line breaking back, and for a while the game looked in the balance, but Ka-pow! maintained their focus and scored a number of clinical points to finish the game.
Ka-pow! 13 – 5 Tooting Tigers

Game 3: Fire 1
Finishing their games relatively quickly, and in doing so holding top seed in the group, meant that Ka-pow! had the luxury of a break before their crossover game against Fire 1. During the game, however, luxuries were few and far between – the game was scrappy throughout, with both teams fighting for whatever they could get. Turnovers were far more frequent than either team would have wanted, although many of these were from high-pressure defence or impressive blocks. After a tense few points with both teams’ offensive lines being scored on, the Ka-pow! defence stepped up and went on a run to give their team first a cushion, and then the half. Tactical timeouts were key in this game, and none more so than one in the final point. After taking down a huck just outside the endzone, David Pichler paused the play which, upon restarting, led to an easy assist to Smatt to win the game. Exacting revenge against the Fire team that had beaten Ka-pow! in the final game of Tour 2, they now had earned a place in the final.
Ka-pow! 9 – 5 Fire 1

Game 4: Clapham
Having guaranteed a top-two finishing position – and with it a ticket to Southampton – Ka-pow! entered the game wanting to see what they could do against the newly-crowned Tour champions. For the first time playing on an upwind-downwind pitch, Clapham broke early to score the downwind point. The two teams traded, with the defence lines coming close to scoring, however finding the final pass proved difficult. Ka-pow! looked happiest playing against the Clapham zone; crisp passing found all the gaps they needed to work the disc quickly up the pitch. Despite cramping earlier in the game, Seb “Shabba” Shapland pulled out a big performance and some even bigger grabs to take down several upwind hucks. Unfortunately this would not be enough and, continuing their lead into the second half, Clapham completed their first step towards winning Nationals once more by winning Regionals.
Ka-pow! 7 – 13 Clapham

Despite ending on a defeat, Ka-pow! put in a strong performance to take second place in the London region. A reliable defensive line proved invaluable, not only holding out against some quality offenses but also converting those points in style to gain some important victories. Building on the foundations laid down over the year, Ka-pow! look forward to matching up against some of the best teams in the UK at the showpiece event in the UKU calendar, and ultimately to try to earn a debut appearance at xEUCF.